Every industrial sector is striving towards a carbon neutral or zero-carbon future. It is expected by society, demanded by customers and recognized and approved by shareholders, as part of a company’s environmental, social and corporate governance (ESG) policy. By 2030, it is thought that around 65% of the cars in Europe will be powered by battery electric (BEV) drivelines. By 2040, the heavy truck business is expected to have followed suit, with BEV powertrains for local urban last-mile delivery and a mix of BEV, bio-LNG and bio-CNG gases and hydrogen fuel cells for longer-distance haulage.

The Information and Communications Technology (ICT) sector, driven by telecoms networks and data centres, could be responsible for up to 14% of global carbon emissions by 2040, up from 3-4% today, according to a report in Environmental Finance. The introduction of 5G is expected to lead to a further rapid rise in data use, with research suggesting that the 5G ecosystem could lead to a 160% increase in power demands by 2030.

The telecom sector has already committed to tackling climate change though, with the release of a science-based pathway to reduce greenhouse gas emissions across the sector. “The mobile industry is one of the first major sectors in the world to voluntarily set a science-based target for emissions reduction,” said Mats Granryd, Director General of the GSM Association.

In an article in UN Climate Change News, he commented: “Our sector will form the backbone to the future global economy and has a unique role to play in reaching a net zero economy. A decarbonised world will be a digital world, so we must show leadership and take responsibility for driving positive climate change action.”

Mobile network operators, tower companies and energy service companies are all being forced to consider a wide range of potential solutions, many of which may only be stopgaps, or steps in the advance of technological progress.

For telecom installations where there is no grid available, or the grid is unreliable, diesel generators currently dominate. As with other industry sectors, there are already options available, with new solutions in development. Mobile network operators, tower companies and energy service companies are all being forced to consider a wide range of potential solutions, many of which may only be stopgaps, or steps in the advance of technological progress. The only thing that most can agree on, is that there will be continued demand for carbon reduction, not to mention cutting nitrogen oxides (NOx), particulate matter (PM) and other hydrocarbon emissions.

As Nick Rawson, Head of Product Innovation at Bladon Micro Turbine, puts it: “The days of diesel ruling all, are over.”

Any transition away from off-grid and bad grid reliance on diesel-powered generators is fraught with risk. As an early adopter of new technology, there is always a risk that the solution may turn out to be less than ideal. However, leave your acceptance of change too late and you can easily be left behind, in terms of both capability and expertise, facing massive financial investment to catch up with competitors.

An innovative technology is likely to be capital expenditure intensive, at least initially. The driving force behind the change may also be out of a company’s control. Telecoms companies are not responsible for the infrastructure that will be required to support large scale movement to alternative fuels. Investing in a fuel supply, over which they have no control, is therefore fraught with risk. Hydrogen and high-grade methanol fuel cells are an example of a technology that is at the mercy of external factors beyond the telecom sector’s control.

Investors can also be at the mercy of government decisions, which are liable to change. China, for instance, is rapidly developing hydrogen manufacture and distribution in line with government policy, but that is certainly not the case in many other countries, where a realistic hydrogen distribution network remains decades away. Logistics therefore play an important role in any transitional period and each potential solution must be assessed holistically.

A particular fuel might provide the solution to the problem in a specific operation, but if the cost of bringing that fuel to site is prohibitive, or not even possible, then the technological solution itself may not be viable. This is particularly true for the telecoms industry, which is necessarily widely distributed geographically, often in challenging environments.

According to the International Energy Agency, to reach net zero emissions by 2050, annual clean energy investment worldwide will need to more than triple by 2030, to around $4 trillion. It believes that most of the reductions in CO2 emissions through to 2030, will come from technologies already on the market today. But, the Agency claims, by 2050, almost half of the reductions will come from technologies that are currently only at the demonstration or prototype phase. The ability to utilise a range of fuel options as we progress, will be key to reducing dependence on a single technology.

Diesel has been the main driving force in the power generation market for many years and the constant adoption of stricter exhaust emission standards has seen a remarkable reduction in CO, CO2, PM and NOx over the last decade. However, as we know, the world is moving away from diesel for environmental reasons. From an economic perspective, as we have seen recently with steep global increases in oil costs, reliance on a single commodity like diesel for backup or prime power, also leaves industries exposed to commodity price shocks.

FAME (Fatty Acid Methyl Ester) biodiesel and HVO (Hydrotreated Vegetable Oils), are existing alternatives to diesel, offering a far lower carbon footprint. However, FAME is a challenging fuel for piston engines to use reliably, though it is readily available, particularly in Asia. HVO is a drop-in replacement for diesel, but is in such high demand that there is a shortage of supply and, longer term, there isn’t enough feedstock for it to become a serious alternative for telecom’s energy supplies.

Biogases will for many be the next step, with largescale production from sources such as the waste industry expected by 2023. Biogas can be carbon neutral and utilises waste that currently produces huge quantities of methane, a potent greenhouse gas. Biogas is easy to manufacture and is predicted to see significant growth, particularly in areas where plant, animal or human waste are readily available. Biogas, though, is also limited in scale, which brings us to hydrogen.

While hydrogen is certainly being promoted as a fuel of the future, it could be 5-10 years before it is widely available and considerably longer before it is a practical alternative to power a telecom tower generator in non-urban environments. Hydrogen has to be compressed, which uses energy, and transportation requires large high-pressure tanks. Even at this pressure the extremely low volumetric density of hydrogen means a large tanker can transport relatively little energy, making it impractical for more remote locations. Those locations will need to use an alternative low carbon fuel, potentially FAME, HVO or biogas, depending on the application.

Renewables offer a potential solution in some parts of the world. Solar and wind can deliver enough power to operate smaller installations, particularly with battery back-up, although they can struggle as capacity increases. Low-carbon power generators can also provide back-up for renewable power sources, delivering a hybrid approach, that keeps costs and carbon low, but maintains the critical reliability required by telecoms infrastructure.

Flexibility will be key in any transitional period. The ability to opt for different fuels to meet developing demand and supply, will allow operators to keep pace with changing legislation, delivering acceptable power, without major capital expenditure at every step along the way.

Bladon’s Micro Turbine Generator (MTG) is a fuel agnostic solution, capable of operating with a wide range of fuels. The modular combustor in the micro turbine is easy and quick to change on site, in less than an hour in most cases, offering operators an effective, financially secure solution to meet ever changing legislation and fuel type availability. This eliminates the risk of obsolete stranded assets, or an inability to source the specific fuel required by other generator types.

Currently capable of running on diesel fuels, kerosene, paraffin or low carbon HVO, and FAME biofuel blends, the company is already working on a hydrogen solution, with a demonstrator due later in 2022. A biogas combustor has already been developed and will be commercialised in 2023. This ability to run on a wide range of fuels, provides energy service companies and tower companies with a multi-site solution from a single supplier. This will allow customers to, in essence, use the same base machine, with a comprehensive variety of fuels, on remote telecom tower sites across the world.

Flexibility will be key in any transitional period. The ability to opt for different fuels to meet developing demand and supply, will allow operators to keep pace with changing legislation, delivering acceptable power, without major capital expenditure at every step along the way.

With hundreds of thousands of towers with no grid, or a bad grid connection, the MTG can be used as the main power source, or increasingly, as back-up to a range of renewable solutions. It delivers total network security and a long-term solution, that can keep pace with the transition to a zero-carbon future. The MTG provides fuel flexibility, reducing operating and financial risk and meeting the changing needs of customers across the world. 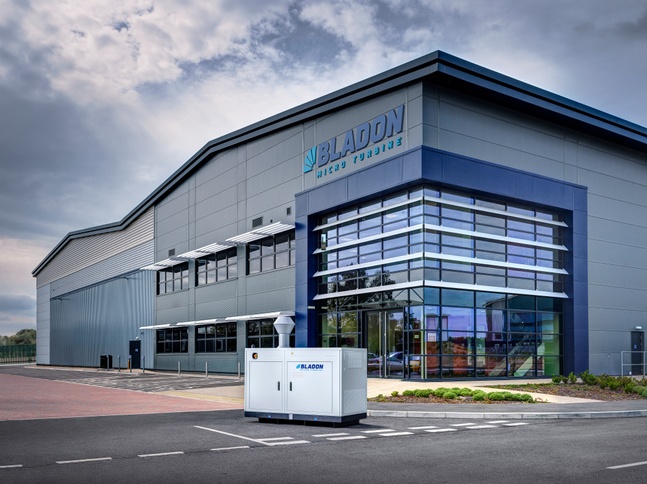 The Bladon MTG is produced at the company’s new engineering and manufacturing facility in Leamington Spa, at the heart of British engineering excellence.